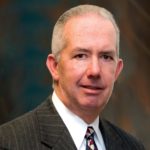 Floyd arrived In San Francisco in January 1983 to be the regional controller for the developer of the 750,000 square foot 333 Bush Street high-rise. Later, at Oakland City Center, he was instrumental in negotiating and closing the sale of the 486,000 square foot Clorox Building. As CFO for JMA Properties in the late 1980’s, he secured $112 million in financing for 13 properties. His Bay Area career culminated with his appointment in 1997 as Senior Vice President for Shorenstein, where he managed all of the Company’s administration, consisting of a staff of 80 and a $10.8 million annual operating budget.

Floyd also completed two years of service to the Galena / Steamboat Citizens Advisory Board, six years on the board of the Reno Philharmonic Association, where he served as chair of the Audit Committee and as a member of the Finance Committee, and the Board of the Terry Lee Wells Nevada Discovery Museum, where he handled the purchase of the Museum’s building.